SAERTEX INVESTS IN MODERN PRODUCTION PROCESSES IN SAERBECK AND WORLDWIDE

Saerbeck, September 15, 2017 - SAERTEX® is investing in the efficiency of its Saerbeck production site. A new, state-of-the-art 10,000 m2 production building was successfully completed this spring. Investments were also made in new machine technology for the carbon production sector. Both are part of the SAERTEX® global production strategy with digitally networked locations in 9 countries on 5 continents.

With the construction of a new building at the Saerbeck company headquarters, SAERTEX® has developed a production area with an additional 10,000 m2 which now covers a total area of 50,000 m2 at the most important production plant of the SAERTEX® Group. Two aspects were important here – to create efficient production and work processes and to protect the health of employees.

In addition to constructing the new building, SAERTEX® has also invested several million euros in new machinery, such as a HeavyTow machine for carbon (CFRP) materials, to optimize production capacity. This is a response to the increased demand for CFRP materials in markets such as aerospace, rotor blade construction for wind turbines and the increasing use of SAERTEX® materials in the automotive and boat building sectors.

The new machine generations, in particular, have become significantly more complex, as they generate more goods in less time. This also has an impact on employees, who are exposed to higher overall physical stresses as a result. With the infrastructure of the new building, SAERTEX® has created an environment that supports machine operators in their daily work and consequently protects the health of employees.

With the commissioning of the new production building in Saerbeck, SAERTEX® has set yet another milestone in its global production strategy. The first machines in the new building are already up and running; this process should be completed by the beginning of next year. In addition to the main plant in Saerbeck, SAERTEX® has responded to the increasing demand for glass, carbon and aramid fiber textile reinforcing materials (non-crimp fabrics) in 2016 by expanding its production capacities at its Portugal location by 50%.
With 9 production locations on 5 continents, SAERTEX® is globally active. The introduction of the SAP ERP system throughout the company has helped to gradually link these locations with each other. In addition to the digitally connected locations in Saerbeck, Portugal, India and Brazil, the key location in the USA was successfully converted to the SAP system during the summer. This new system will help better coordinate internal and external processes to improve delivery and performance for customers.

About SAERTEX:
The family-owned company SAERTEX®, with a turnover of approximately €350 million (2016), is the global market leader for manufacturing multiaxial non-crimp fabrics and core materials for the production of fiber-reinforced composites. Customers in the wind, aerospace, automotive, sports and boat building industries rely on composites that become lighter, more stable and more resistant to corrosion thanks to SAERTEX® reinforcing materials made of glass, carbon and aramid fibers. For the shipbuilding, transport, oil & gas and construction industries SAERTEX® offers specific support services for the conversion of steel components into composites – from structural analysis and process development through to series production of the components. With some 1400 employees and ten production sites on five continents, together with an active sales network in more than 50 countries, the SAERTEX® group is globally positioned to meet the increasing demand for technologically advanced GRP and CFRP composite solutions. 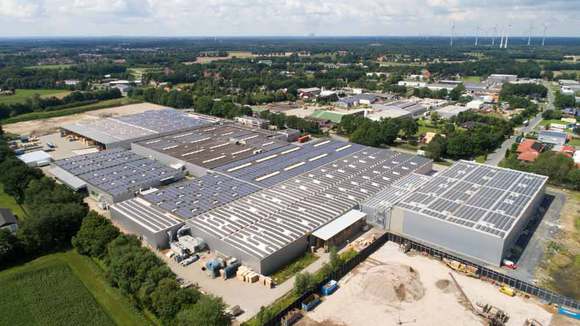