Saerbeck, 18 February 2020, Bombardier Belfast and SAERTEX® have reached an agreement to contractually extend their cooperation on the manufacture of lightweight components made of carbon-fiber, non-crimp-fabrics for the Airbus A220 aircraft.


SAERTEX supplies textile reinforcement materials and carbon fiber non-crimp-fabrics, with which Bombardier produces wing skins for the A220 aircraft using its unique resin transfer infusion (RTI) manufacturing process. Bombardier’s carbon-fiber wings are the largest and most complex composite structures designed, manufactured and assembled, using this RTI technology.
The SAERTEX carbon-fiber, non-crimp-fabrics developed especially for Bombardier facilitate the application of the RTI manufacturing technology. The resulting significant weight savings help the A220 deliver unbeatable fuel efficiency in a single-aisle aircraft.
Christoph Geyer, CEO of SAERTEX, noted the following regarding the contract extension: “The aerospace sector is a key strategic pillar among the SAERTEX business segments. We consider the contract extension as a confirmation of the work we have performed to date and we would like to thank our customer Bombardier for the trust they have placed in us.”

The wings of the A220 are built by Bombardier at the company’s Belfast plant in Northern Ireland. Spirit AeroSystems has entered into an agreement with Bombardier to acquire its aerostructures and aftermarket activities in Belfast, Casablanca and Dallas. The transaction is expected to complete in the first half of 2020 and remains subject to regulatory approvals and customary closing conditions. 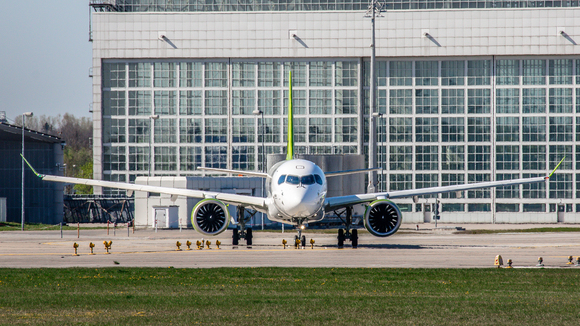