SAERTEX USA, LLC in Huntersville, North Carolina re-engineered its processes for further growth in the NAFTA markets. Milestones within this re-engineering process were the setup of new key processes, introduction of the SAP ERP system and the investment in a new customer service office facility.
During the whole year of 2017 SAERTEX USA, LLC in Huntersville, North Carolina has re-engineered its local processes and structures to manage the increased demand of non-crimp fabric materials in the NAFTA markets.

In cooperation with the global SAERTEX specialists the key processes in production, logistics and customer service had been revised and optimized. A major part of this re-engineering was to improve information flow and digitalize processes.

SAERTEX USA also constructed a 13,000 sq. ft. office expansion to its existing Huntersville, NC, facility, effectively doubling office space and converting the former office space into an additional 6,000 sq. ft. of production space in June 2017. The total production space for the Huntersville, NC, facility is now 160,000 sq. ft.
The smart office concept is part of the re-engineering project of the second largest subsidiary of the SAERTEX Group. It is home to the local customer service and material engineering team to develop customized Non-Crimp Fabric reinforcement solutions for the local markets. Those teams are now located within close proximity to both the production and logistics departments, which has resulted in improved cooperation and communication.

“Our customers already confirm major improvements in the fulfilment of orders and information flow. But we have set ourselves ambitious targets to further improve customer satisfaction. We see this as the base for further growth with our existing business and in new markets like transportation, automotive or construction”, says Kyle Kraus, Vice President Sales SAERTEX USA, LLC.

In November 2017 the new standardized processes had been proofed by an ISO EN 9001 audit to pass this external review with remarkable improvements in comparison to the former year.


About SAERTEX:
The family-owned company SAERTEX®, with a turnover of approximately €350 million (2016), is the global market leader for manufacturing multiaxial non-crimp fabrics and core materials for the production of fiber-reinforced composites. Customers in the wind, aerospace, automotive, sports and boat building industries rely on composites that become lighter, more stable and more resistant to corrosion thanks to SAERTEX® reinforcing materials made of glass, carbon and aramid fibers. For the shipbuilding, transport, oil & gas and construction industries SAERTEX® offers specific support services for the conversion of steel components into composites – from structural analysis and process development through to series production of the components. With some 1400 employees and ten production sites on five continents, together with an active sales network in more than 50 countries, the SAERTEX® group is globally positioned to meet the increasing demand for technologically advanced GRP and CFRP composite solutions. 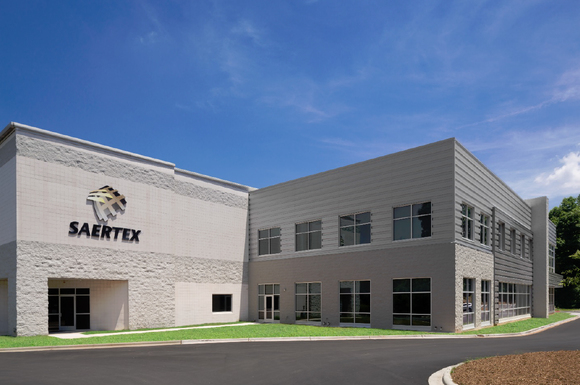