The SAERTEX LEO series stands for optimum fire protection in rail transport, the marine market or the construction industry. For the renovation of the floor panels in 66 trains of the ICE fleet of the Deutsche Bahn with fireproof SAERTEX LEO materials, SAERTEX recently received two awards: On November 5th, SAERTEX was awarded 3rd place at the AVK Award in the Products/Applications category for its project at the International Composites Congress (ICC) in Stuttgart. In addition, the entry won 1st place in the Railways category at the JEC ASIA Innovation Award, which was presented on November 15th at the JEC ASIA trade fair in Seoul, Korea.

The SAERTEX LEO composite system meets the high HL2 fire protection requirements in R10 in accordance with EN 45545 for use in rail vehicles. In contrast to conventional fire protection systems, LEO does not negatively influence mechanical parameters. The LEO system consists of four components, with SAERfoam® as the core material, an NFC layer of fiberglass, special LEO infusion resins and a LEO protection layer as the finish.

SAERTEX LEO thus meets international fire protection standards in the rail vehicle, shipbuilding and construction industries with regard to flame propagation and smoke development. Compared to conventionally manufactured components, the LEO laminates offer impressive mechanical properties and, in the case of the floor panels in the ICE-3 fleet, 50 percent less weight. Train floors are frequently exposed to moisture not only in snowy regions; as opposed to the materials used up to now, the material components contained in the LEO system do not rot.

“We are extremely pleased to have received such recognition for our innovative performance in this project and would like to thank the juries,” says Daniel Stumpp, Head of Global Marketing at SAERTEX. “Special thanks also go to our two project partners: SMT Montagetechnik in Forst, Germany,  and Alan Harper Composites in Great Britain.” 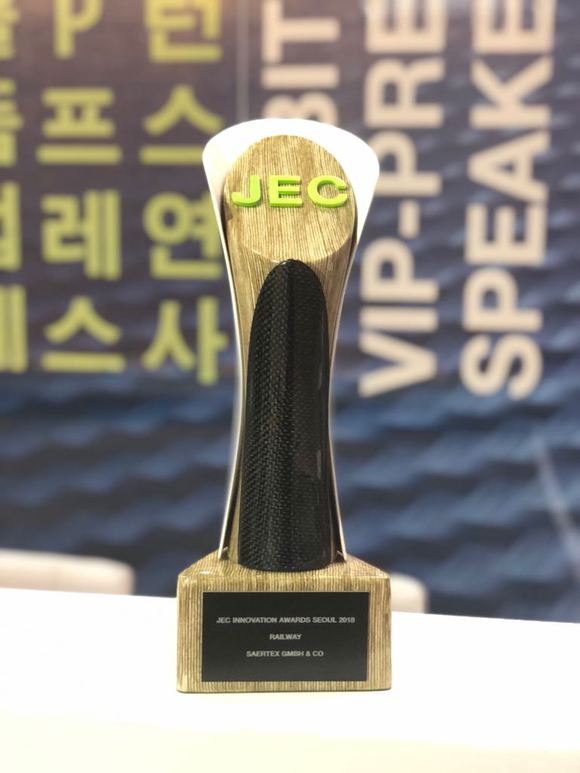