We are pleased to announce that SAERTEX will have a new production site in the north of Mexico in Ciudad Juárez. This new facility will join 14 other SAERTEX production sites strategically located around the world. Originally, SAERTEX had planned to open the Ciudad Juárez facility by the end of 2020. Due to the Coronavirus pandemic, however, the date has been postponed to early 2021. Preparations are still in full swing, and we regularly review the schedule to adapt to the current situation.


Like our facilities in Huntersville, North Carolina (USA) and Indaiatube (Brazil), the Ciudad Juárez plant will allow us to meet the growing demand for SAERTEX composites materials in the region and the Americas, as well as help us to conserve resources by shortening delivery routes.

Ciudad Juárez is one of the fastest growing cities in Mexico, and international companies such as Bosch, Siemens, Honeywell, and Foxconn are settling there. In addition, the area has become an important hub for the production of rotor blades for the wind industry. 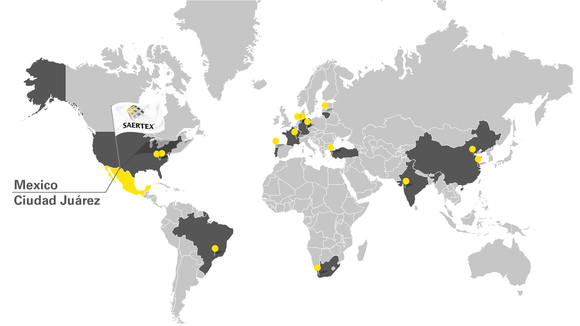 UPDATE ON OUR DELIVERY SITUATION DUE TO THE COVID-19 PANDEMIC

We have successfully worked to avoid disruptions caused by COVID-19 coronavirus, while at the same time acting responsibly to prevent further spread of the virus.

Due to the development of the worldwide pandemic situation and possible travel restrictions, JEC World’s next edition is officially postponed. The next edition will now take place from March 8th to 10th 2022, at the Paris Nord Villepinte Exhibition center.

Looking for a complete overview of our mechanical values of LEO textiles? Then we have something for you!